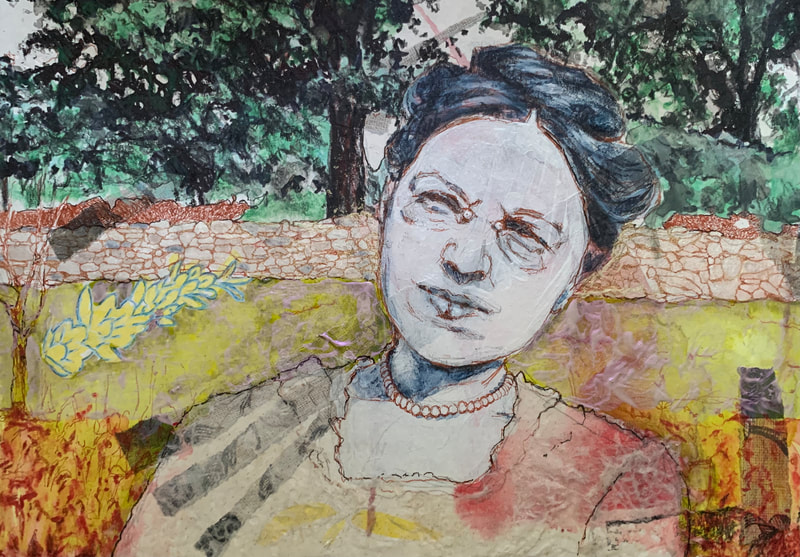 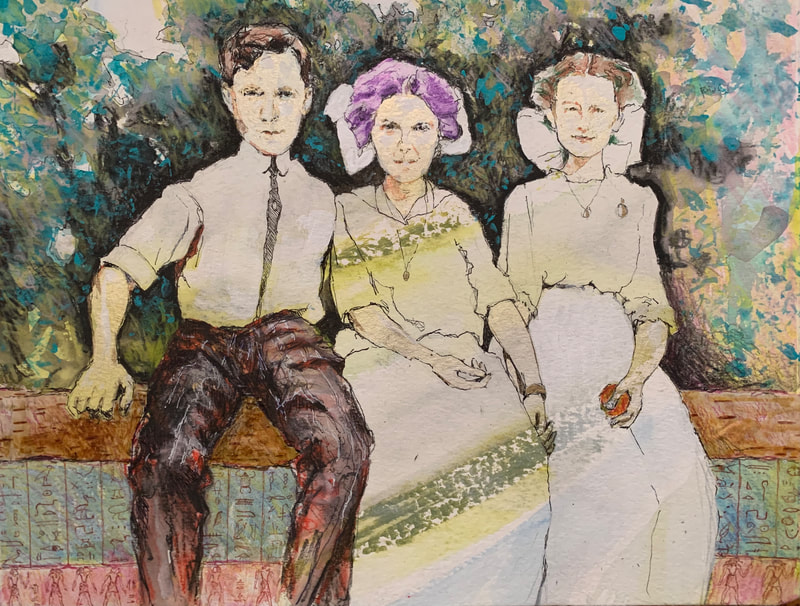 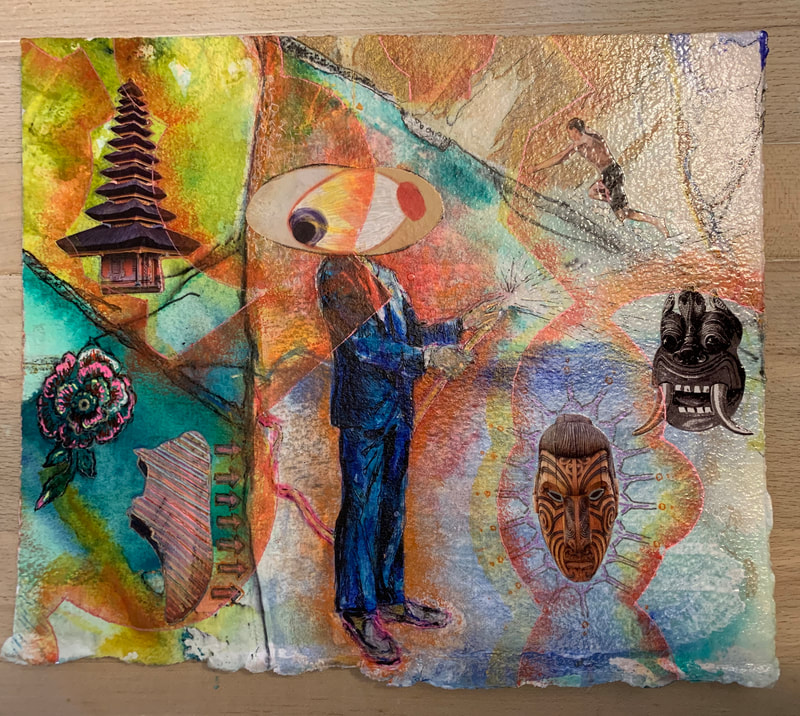 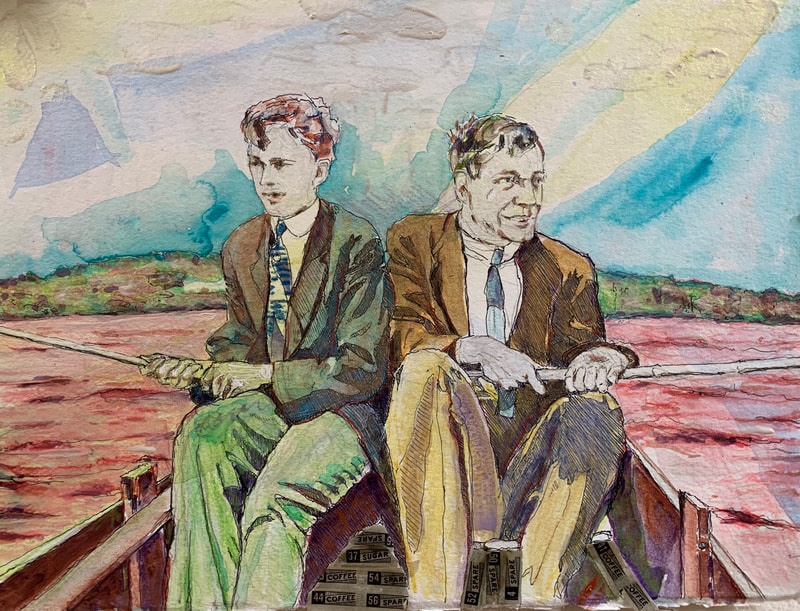 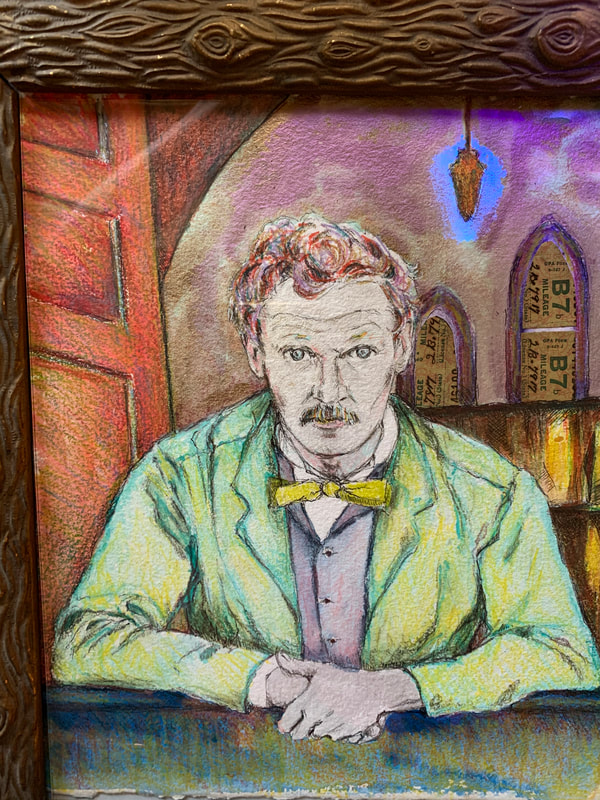 
​For some time now I’ve been evading the sirens’ call to return to portrait making.  The recent deaths of my mother and sister have only amplified their imperatives.  In the weeks after Caroline’s passing, I was drawn to a stack of three photo albums on my living room coffee table. They had belonged to my maternal great grand mother’s family.  The work here is largely drawn, literally, from these ancestral photos.


I am calling the works, “inklings”.  I love the word ‘inkling’, in that it alludes to ‘beginning to understand’.  The creating process has gripped me in a manic obsession of completion.  Like a purging.  (my family can testify to the truth of this weeks long fugue - there have been almost no available horizontal spaces to seat one’s self).  The truth is, I do not know why I am doing what I am doing.  I have a hunch the effort will be revealing.


I would like to speak to some choices.  The inclusion of WWII ration stamps. They are a tangible temporal bridge.  The eldest photo album is dated 1911.  The world had yet to experience the First World War.  Most likely could not fathom that humanity would once again, within the century, self mutilate globally in a Second World War.  On a personal level, in an attempt to understand my predecessors, I try to imagine a planet, inhabited by a people who did not bare these scars.  The innocence


Currently, we are living a global horror.  The corona virus pandemic. I live in a nation that has a strongly doubtful sense of civic compassion.  Can you imagine asking our fellow Americans to live metered by ration stamps for the sake of the ‘greater good’?  It is laughable.  And that, is not laughable, in the least.


Pages of a psalm book in another language.  The hands of an immigrant.


A link to eternity.


Another choice.  Invisible ink.  Invisible ink makes me giddy.  It is ghostly and haunting.  Coldly, and impossibly illuminating.  It’s there, right under your nose.  So subterranean, it just might not yet exist.  And, somehow, there it is.  I loved showing my son a new inkling, handing him an ultra violet flashlight and watching as he searched for the area, perhaps a cuff, often a shadow,  or even a black hole... that had been washed in the ink.  Like a treasure hunt!  All my life, I have had a love affair with what exists beneath the surface, the beyond.  Invisible ink is a lovely metaphor for that passion.


What have I learned about my pre-people?  There was a native photographer in their midst.  These are not formal portraits.  This is in vivo photography.  We never see this person, at most, their shadow.  She wore her hair in a bun.


There is mirth.  A woman drove the carriage. There is time reading on the front porch.  Hand holding.  Animals were worth the film.


Footnote:
The framed dress is period appropriate, both now and then.  The presentation is once again, a nod to the pandemic. Recall, if you will, the Stanley Kubrick film, “The Shining”.  Broadly, a portrait of a de-evolution into isolation induced psychopathy. 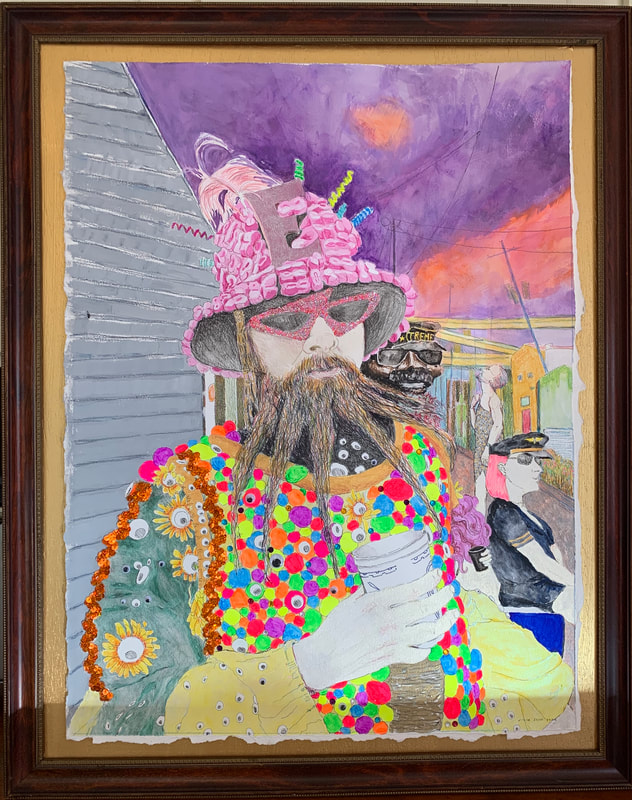 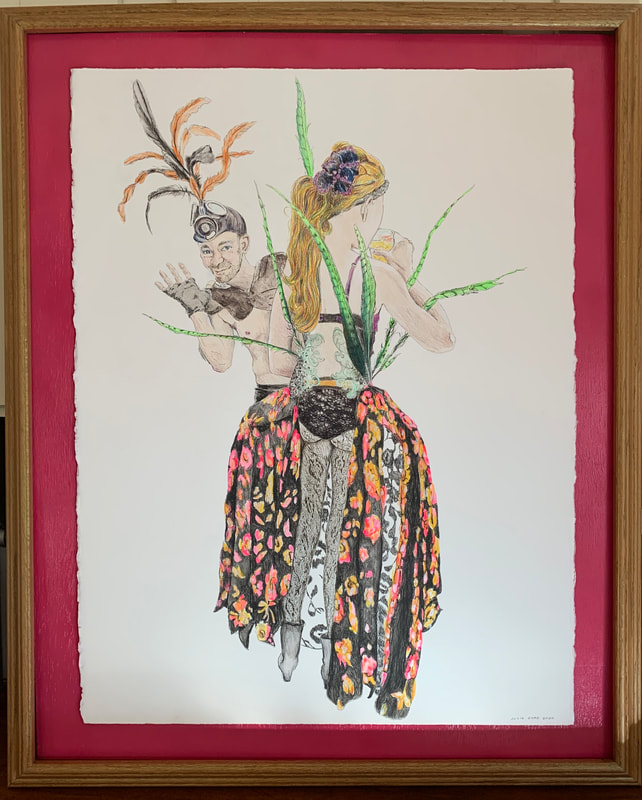 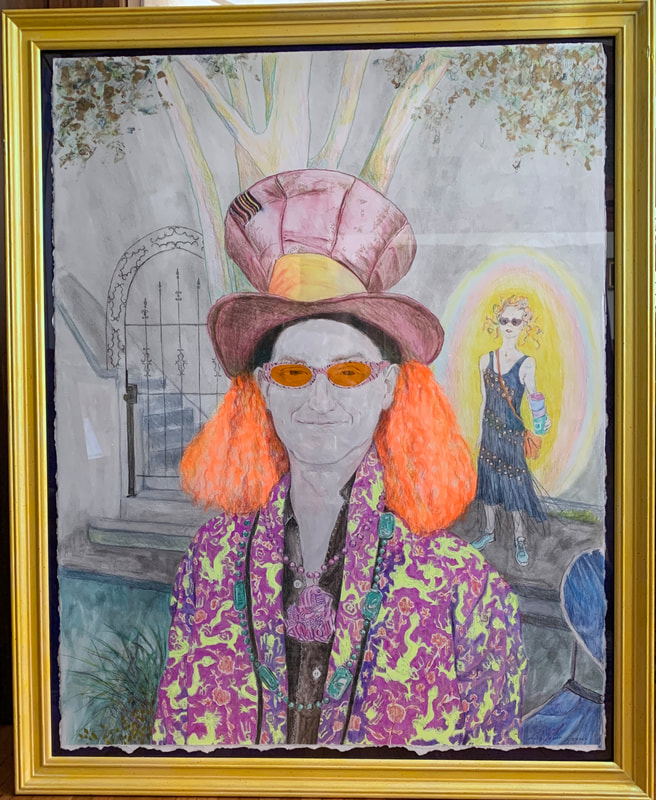 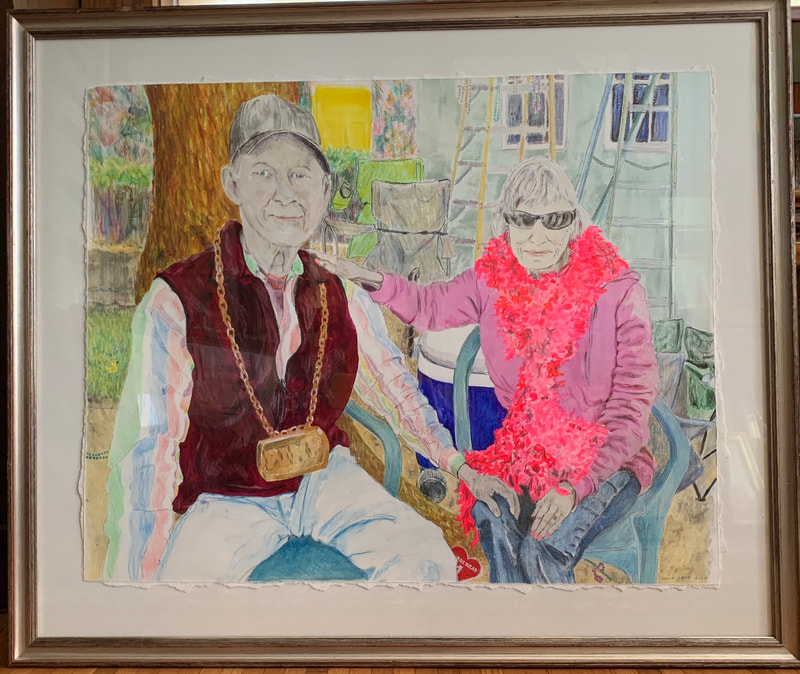 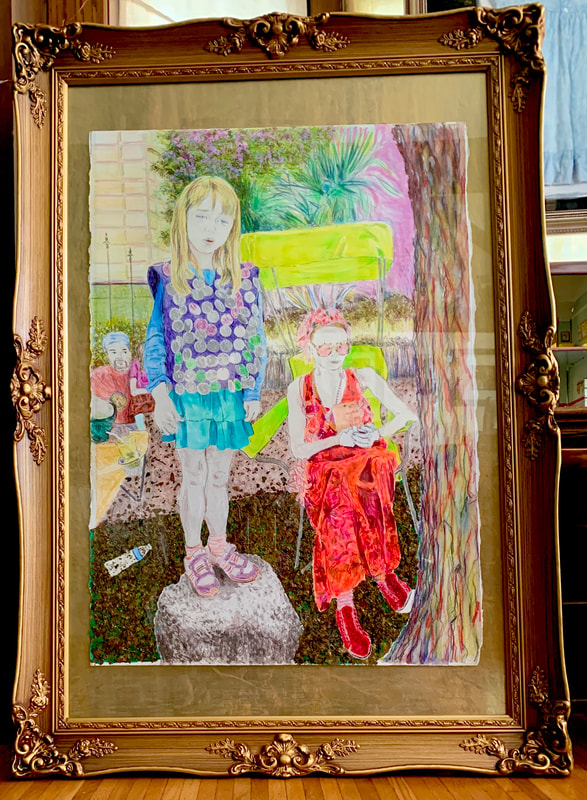 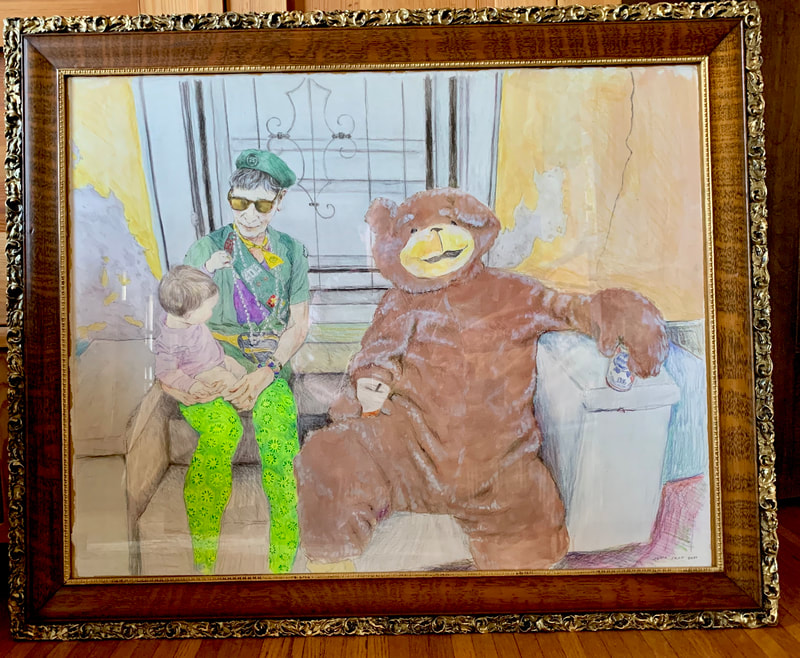 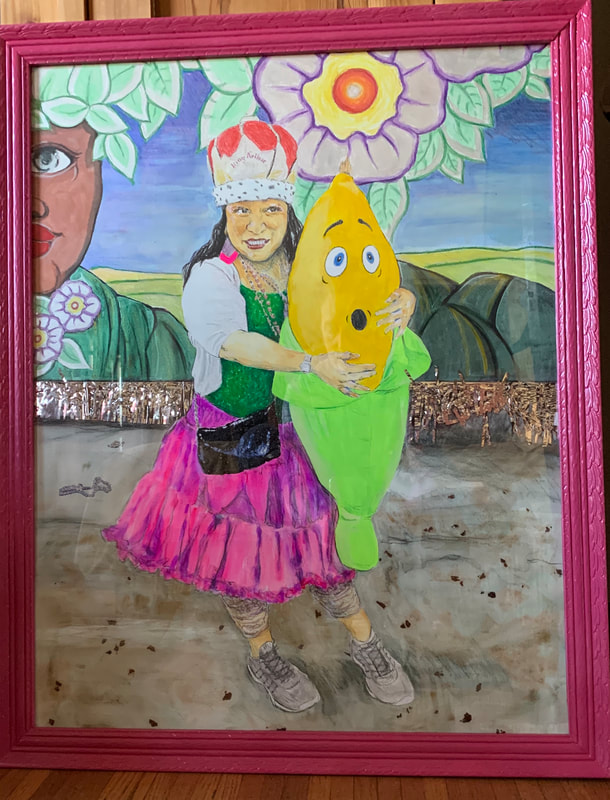 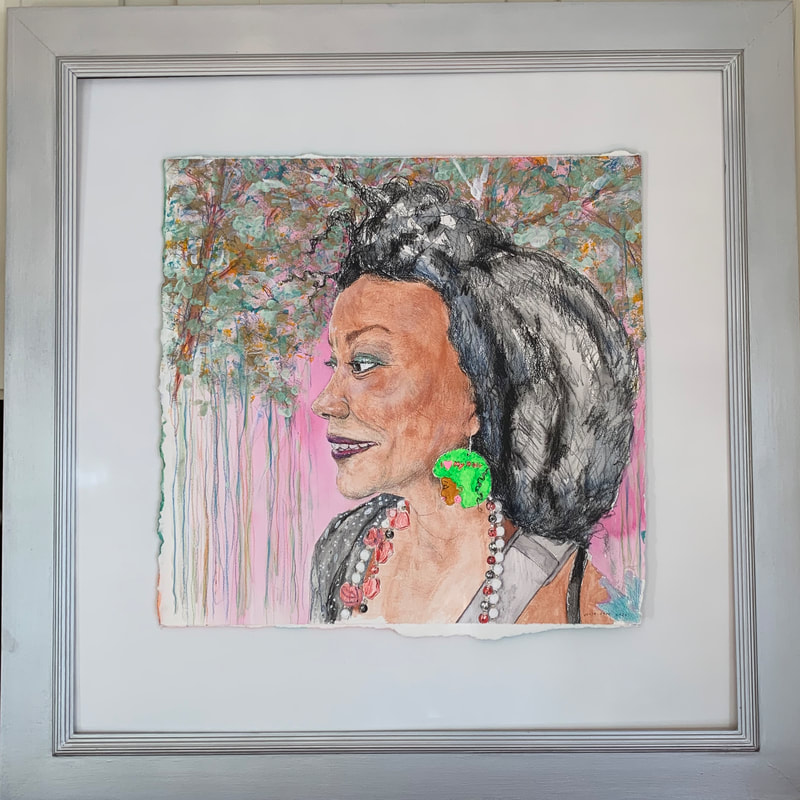 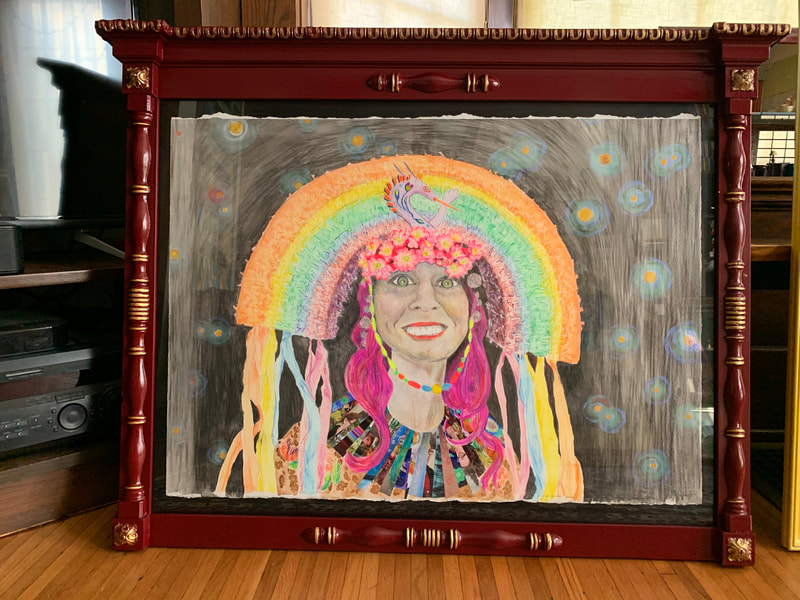 ​MA​RDI GRAS SERIES
​My dear sister Sarah Jane, having lived in New Orleans for more then two decades, became my  ambassador to all things Mardi Gras.  For the natives of New Orleans, the season is richly nuanced in culture and creativity.   I learned from my sister which parades were best, the most ideal viewing locations, how to dress, necessary provisions, as well as how to traverse within and around parade routes, and most importantly, where to park.  As do many, Sarah would spend the preceding year, making costumes.  She took great pride in her creations, many of which were made from the parade throws she collected during past Mardi Gras seasons .


There is much that I have grown to love about the tradition of Mardi Gras, and in this series of paintings, I have tried to convey some of the beauty and theater of the event.  Mardi Gras is an opportunity to express individual creativity en masse.  It is a party, that is literally, the size of a  city.  Throughout, one will have hundreds of chance encounters with hitherto unknown individuals, generous, hilarious, and affirming in character - passing of swag, costume admiration, sharing of food, drink, humor, music and dance.


Sarah passed away two years ago.  In many ways, making these paintings has helped me define and celebrate my sister, what she valued, and the amazing city that is New Orleans.